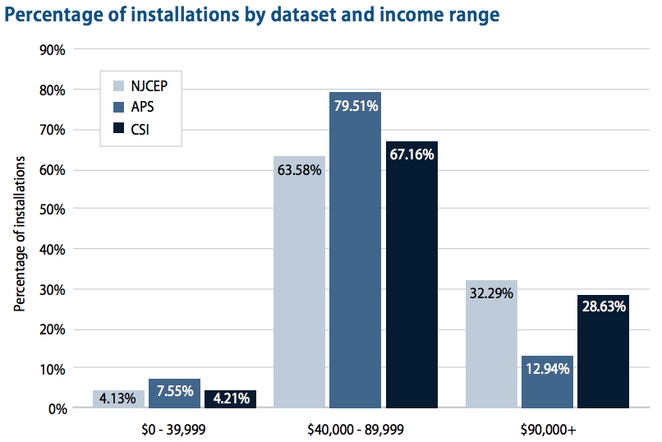 Between helpful rebates and advancing technology, residential solar power has really come a long way. Due to its lower cost and the abundance of solar financing options, solar power is now more accessible than over, as shown in a recent report released by the Center for American Progress.

The report indicated that homeowners across America have begun to lead a “solar revolution” of sorts, citing the fact that, “Since 2000, more than 1,460 megawatts of residential solar installations have been installed across the country, and more than 80 percent of that capacity was added in the past four years. In 2012 alone, rooftop solar installations reached 488 megawatts, a 62 percent increase over 2011 installations and nearly double the installed capacity added in 2010.”

The study took a look at solar installation data from Arizona, California, and New Jersey, and found that a large amount of new installations were occurring in middle-class neighborhoods, with median incomes ranging from $40,000 to $90,000. According to the report, “The areas that experienced the most growth from 2011 to 2012 had median incomes ranging from $40,000 to $50,000 in both Arizona and California and $30,000 to $40,000 in New Jersey.”

This is great news for homeowners, and it shows the continuing accessibility of residential solar power for the middle class. Gone are the days when solar was only limited to the wealthy.

The report concluded that, “Middle-class homeowners are leading the rooftop solar revolution. This finding will have far-reaching implications as utilities across the country consider revising their solar programs and rate structures, which benefit lower- and middle-class people—who are increasingly installing solar—and not just wealthier people.”

As America’s middle class continues to embrace residential solar power, we can hopefully look forward to more financial programs and incentives for homeowners of all income ranges who are looking to go solar.

Mohler Solar has worked with countless homeowners of varying income levels, who need help taking the next step. In fact, we work primarily with San Diego Metropolitan Credit Union, who provides a variety of flexible solar financing options for San Diego homeowners. To get started on your residential solar project, contact us today for a free quote!